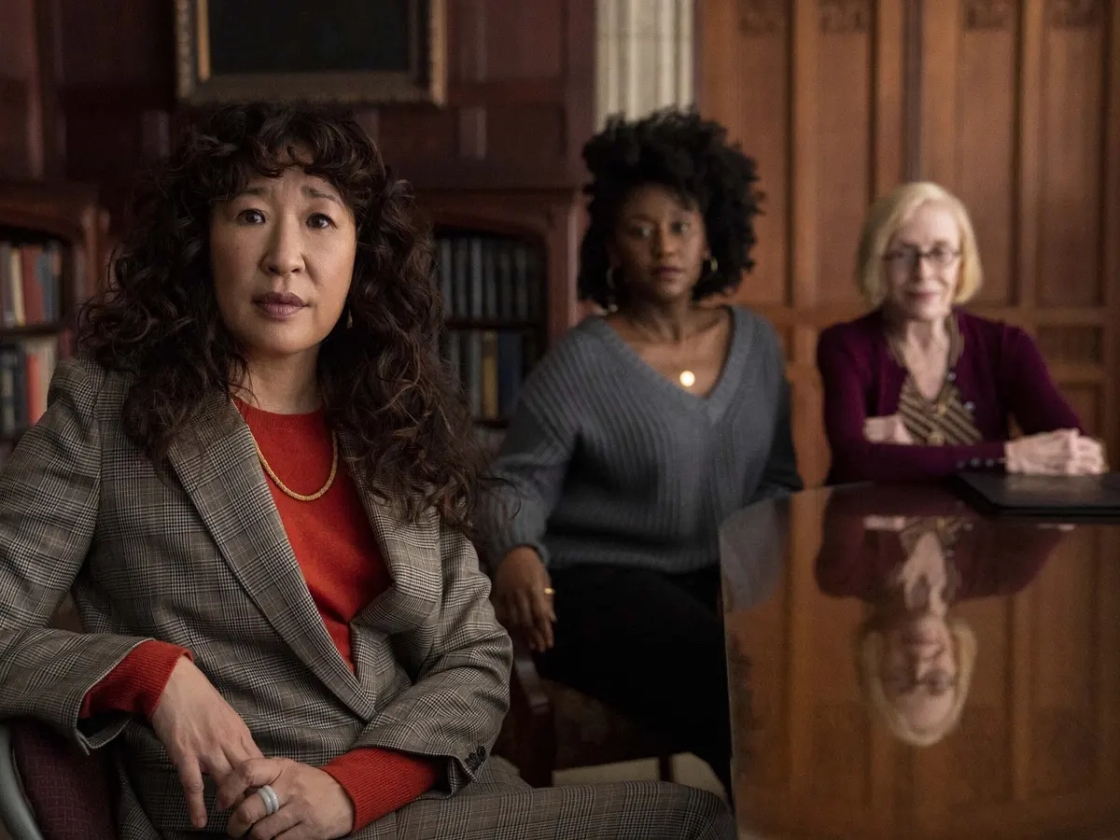 It has been quite a while since I’ve been genuinely excited about a show, from the concept to the final product, The Chair (Netflix) has fully reignited my love for TV and comedy. Staring the incomparable Sandra Oh, the show depicts the first woman of colour to be made head of the English department at a renowned university. Dr Ji-Yoon Kim (Sandra Oh) however faces an immense amount of challenges in both her professional and personal life, making this stellar achievement far from easy.

Now for the longest time I have been a sceptic of comedy shows; shows like Friends and Brooklyn Nine-Nine are just not my cup of tea. So when I noticed that The Chair was a comedy-drama I was dubious whether it was going to be a hit or not. Nevertheless, I was laughing through every single episode, which means it was a real shame when I noticed every episode was only 30 minutes long. I may be slightly bias considering it’s set in an English department however the complex narrative that underpinned the show was extremely topical and thought provoking. For the longest time that is what I have missed in a comedy show, a storyline which was interesting, original and layered. A storyline which was full of truth as well as being extremely funny.

I want to start with Sandra Oh. I mean with her stellar repertoire of films and TV shows, you know what you’re going to watch is going to be good. However, the Canadian actress flourished in this dynamic role and I loved that she was the principal character. The script only accentuated her talent and pushed the Sandra Oh who we know well from Killing Eve and Greys Anatomy to new heights.

It’s a six part series created by Amanda Peet and Annie Julia Wyman, Oh’s character faces the professional challenge of resurrecting the English department (and the Arts) from the brink of death as the department is failing to take in new students. Additionally with an ageing department (more on that soon), a series of questionable events, her daughter Ju-Ju’s testing relationship and a new romantic relationship on the horizon, Dr Ji-Yoon Kim has a lot on her plate.

The one thing that really got me about this show was how much it touched on popular culture/issues. Peet and Wyman managed to pack this show with an array of content without making it seem overcrowded or forced in. As Lucy Mangan stated in her review of the show, it deals with ‘racism, sexism and ageism to newer, more slippery eels such as cancel culture, the clash between working practicalities and ideological dreams, questions of who has authority, why and how far it extends and more’. As you can see the show tackles some hard hitting points but in a way that is comical and importantly not at the characters detriment. It’s refreshing to see a 40 year old Asian woman portrayed as a well rounded character, rather than Othered, Orientalised and/or Exoticised, which has been done far too much in the industry.

Of course, Sandra Oh’s performance is phenomenal but to me, there was one other character who stole the limelight. Joan Hambling played by the infamous Holland Taylor is essential to the comedic flare this show has. Taylor is obviously well known for being in Legally Blonde, The Practice (for which she won a Primetime Emmy award in 1999), and George and the Jungle (to name a few), nevertheless I think this is one of her best achievements yet. Taylor brought an immense amount of wit and finesse to the role and the character itself was, without a shadow of a doubt, my favourite. Unlike her older counterparts, Joan Hambling is fulled by thoughts of her youth, sex and winning one over her male colleagues. At the end you’ll be bowled over by her extremely likeable yet crude behaviour. I guess if that isn’t an advertisement to watch the show, I don’t know what is.

On the other hand you have Dr Ji-Yoon Kim’s personal life which is not only affected by her work but also her relationship with her adopted daughter and her romantic interest with fellow professor and widower Bill Dobson (played by Jay Duplass). The intricate narrative of Kim’s connection with culture and one’s heritage, in her relationship with both her daughter and her dad is executed to perfection. It is not only frustrating for us to watch but also extremely satisfying once it plays out. It is to the credit of the writing team that the sensitive and elaborate subject could be dealt with correctly and with a sense of humour.

Every character has their own issues to overcome but when meshed together you get this extremely dynamic yet lighthearted world where life resembles something extremely messy yet wonderful and most importantly it is completely (in the sense of the events included are very plausible) realistic. If you chose to immerse yourself in this then I promise you will not regret it.

I have explained my love for this show to anyone and everyone who will listen. At six 30 minute episodes there really isn’t any excuse why you shouldn’t start it! Unfortunately the show has gone relatively under the radar and the last thing I want is for everyone to be sleeping on an absolute dime of a show. Plus the more people who watch it means we have a higher chance of getting a second series!

So, get yourself a free evening, a cup of tea and some popcorn because this show deserves some attention!

If you’ve watched it who was your favourite character? And if you haven’t, has this persuaded you?

Let me know in the comments, you know we all love a good discussion!

Sending lots of love (and time to watch TV),

Sophie is a 21 year old student based in the highlands of Scotland and the capital city of Edinburgh. Her website describes her love of food, lifestyle, film and TV and literature. While also writing she has her own shop selling a range of different artistic projects.

I present to you the difficulty of trying to get Sophie to stand still for a decent photo 🤣
Did you miss it?