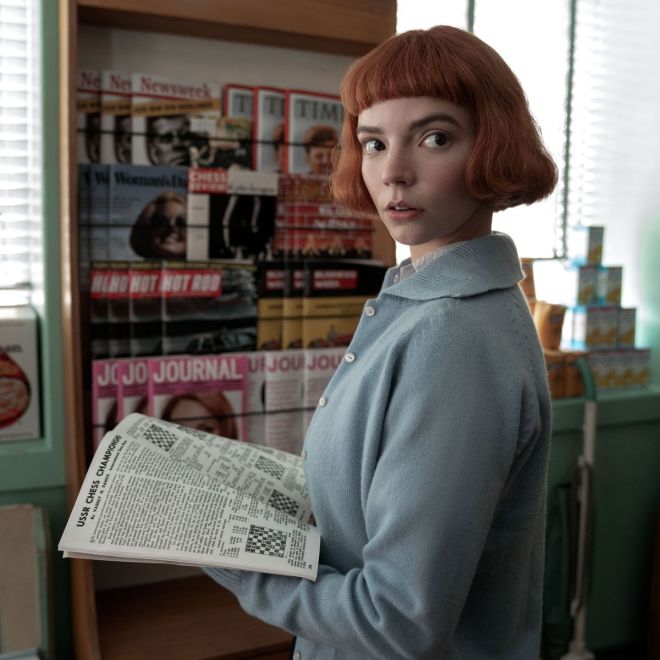 Show of the Month: The Queen’s Gambit

If you couldn’t tell I love a good TV show. Lately I’ve found myself escaping in an hour long episode in the evening. Mostly because taking an hour out of my day doesn’t feel as bad as taking two hours out of work for a film. But with Netflix and Amazon coming out with highly produced and well filmed shows on the regular it is not hard to find your next best hit.

The Queen’s Gambit, a 7 episode mini-series which appears to only be picking up speed now, quickly became my favourite show last month. Set during the Cold War, Beth Harmon is orphaned at the age of 9 where she learns chess from the resident janitor who produces a young chess prodigy. Harmon quickly becomes a well known figure in the chess circuit but this is not without difficulty. Her young years of fame are steeped in addiction and isolation, the question is will she make it to the top or sabotage her chances with drugs and alcohol?

There is so much I could talk about when it comes to this show. From the apparent sexism in the chess circuit, female empowerment produced through Harmon’s character, the struggle of addiction especially with fame, orphanages and a lot more. However I do not want to spoil it and, let’s be honest, there are probably a mountain of articles on these topics. Instead I thought I’d share my general thoughts on the show, what I loved and what I think could have been done better (not that I am an expert or that there is much to comment on in that department).

To start off with I have to mention the stellar acting of Anya Taylor-Joy and the other excellent actors that feature alongside her. I appreciated her ability to act alongside the predominantly male cast and the fact a female leading show has yet again graced one of the largest streaming servers. Her unique and extremely striking features and that eye-catching hair cut allows her, in a stylistic perspective, to stand out amongst the men who mostly wear dark clothing.

But more importantly, her ability to inhabit this rather complex character allows you to feel fully immersed in her journey from a young kid to adulthood. I must also mention that the TV show is based on the book by Walter Tevis although it certainly leaves you questioning at the end if it is a real story (that I wish it was). Which I also think is down to the impeccable acting and cinematography found in the show.

Now if you weren’t already sold the show also features Thomas Brodie Sangster as Benny Watts and Harry Melling as Harry Beltik (who plays Dudley in Harry Potter FYI) to name a few.

What really struck me was the intricacy and level of detail to their performances. In particular I was fascinated by Tayler-Joy’s ability to play these stellar games of chess. From the movement of her arms, to her facial expression to even the smallest detail of how she placed the pieces it is literally a work of art. Part of this will be down to the director Scott Frank whose cinematography was impeccable. Every shot could be a painting deserving of a place in a museum, which alongside the costume, in my opinion, is deserving of multiple awards. The Guardian did an interesting article on the costumes if you want to find out more.

The one thing that slightly irked me about the show was the length of the background episodes. I personally love a bit of character development but the time spent as young Harmon started to drag in my opinion however I understand that this was partly necessary to set up key themes like her addiction. I just wish they appeared less repetitive and more interesting.

Nevertheless, The Queens Gambit is a piece of art not only on a stylistic level but through storytelling, narrative, acting and drama. The show hits all the key points I look for and will leave you in desperate need to watch it in one sitting. How I wish they would come out with another season!

I hope this has enticed you into watching it or if you have let me know your thoughts below, I’d love to know what you thought!

Sophie is a 22 year old student based in Edinburgh and is originally from a small town in the Highlands of Scotland. Her website highlights her love of food, lifestyle, fashion, film and TV and literature. While also writing she has her own shop selling a wide variety of prints and cards.